Among the main objectives of the Department of Political Science is to generate a keen interest in students towards the master science of politics, and enable them to develop a rational mindset towards issues of political significance. It also aims to inculcate political values of social justice, gender equality, and social inclusion among the students.
In the beginning of the new academic session of 2016-2017, the Department organised elections of its students’ body – Avaam- on 13th August 2016. The turn out of the student-voters was 82.5% – the highest so far. on 13th August 2016, indicating the great enthusiasm of our students towards democratic processes. The same day, the Department marked the celebration of India’s 70th Independence Day by organising a essay-writing competition in both Hindi and English
medium, and a painting competition on the topic of “Azaadi @ 70”. On 1st September 2016, the faculty members and students of the Department organised a “Heritage Walk” to the old college campus in Ajmeri Gate to get acquainted with our college’s rich history and continue its legacy. On 3rd September 2016, a highly intense panel discussion was organised on the theme “Democracy and National Security Debates in India”. Prof. Ujjwal Kumar Singh, Dr. Uma Chakrabarty, Mr. Gautam Navlakha, Mr. Rahul Pandita and Mr. Babloo Loitongbam were the eminent panelists. The Department has planned a few more such academic activities for the rest of the semester as well. 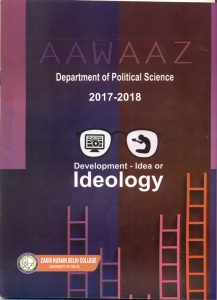