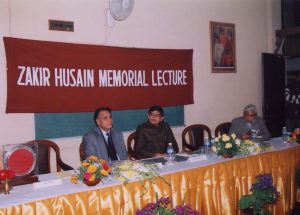 The 28th Zakir Husain Memorial Lecture on “Iranian Facets of Mughal Kinship” was organized on February 25th, 2016. The lecture was delivered by Professor Ebba Koch, Tagore National Fellow for Cultural Research under the Indian ministry of culture (2015-2017).

In her lecture, Dr. Koch highlighted the Persian influence on Mughal art and notions of kingship. The beginning of the cultural influence began in 1540 when Humayun who lost Hindustan to Sher Shah Suri and took refuge in Iran. Akbar too was influenced by the Iranian ruler Shah Abbas’s letter to the former which imagined the king as a ‘shadow of God’.  The link between the Safavid and Mughal empires was also demonstrated in art. One such example as pointed out by Dr. Koch was a painting dated between 1618-1622, depicting an imaginary meeting between Akbar and Shah Abbas. “They were imagined to cooperate each other- both of them were seen as ‘shadows of God, and being young and brave,” stated Dr. Koch.

The 27th Zakir Husain Memorial Lecture was delivered by Shri Siddharth Varadarajan on 24/02/15, on “1984, 1989, 2002: Three Narratives of Injustice and Lessons for Democracy” in the college auditorium. The lecture was delivered by Mr. Siddharth Varadarajan, eminent journalist and presently senior Fellow, Centre for Public affairs and Critical Theory, Shiv Nadar University on the topic “1984, 1989, 2002: Three Narratives of Injustice and Lessons for Democracy”. Mr. Varadarajan termed the 1984 Sikh massacre, 1989 exodus of Kashmiri Pandits from the Kashmir Valley and the 2002 pogrom as three instances of extreme injustice. 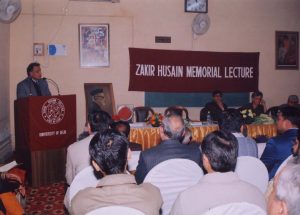